22 people got the award. Andrei Sannikov, leader of the European Belarus civil campaign, was the special guest and presented awards, a correspondent of charter97.org informs.

"Frankly speaking I learned about the organization "Prisoners of Conscience" only after the release from prison, Andrei Sannikov said. - And the organization itself knew little about Belarus before December 19, 2010 , when peaceful protesters were violently attacked and hundreds of people were thrown in prisons. They needed help and "Prisoners of Conscience" came to their help.

This is a unique organization. They provide direct assistance to people who need it at a time when it is required. They help people to survive not in a figurative, but in a literal sense: to buy food, medicines, help families to reunite.

These days we celebrate the eightieth birthday of a great freedom fighter and our colleague political prisoner, Vaclav Havel. Probably few people know that the last signature he put under a letter of support for Belarusian political prisoners.

In 1978 he wrote his famous essay 'The Power of the Powerless'. There he wrote about power of ordinary people who resist repressive regimes. His word has become a powerful incentive for fighters for freedom in Central and Eastern Europe. But the "power of powerless" is not enough to gain freedom, we need "power of those who care" who support prisoners of conscience, write letters to them, help us to fight for freedom in our countries. I can tell from my own experience that this is a huge power that does not allow to veil crimes and helps us to survive in desperate times.

There are people in the hall who are devoted to ideals of freedom and are ready to make sacrifices and defend their principles. But the power of those who care, such as "Prisoners of Conscience" and its director and other supporters, is required to gain freedom."

During the event the director of "Prisoners of Conscience" presented the book "My Story" written by Andrei Sannikov . Everyone who wanted could get it signed.

The host of the evening was the famous British lawyer, one of the patrons of "Prisoners of Conscience" Sir Geoffrey Nice. 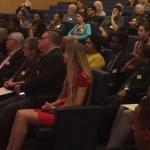 Ultimatum - It's For Everyone Iryna Khalip

Lukashenka Is Doing The Groundwork For His Failure Yury Pshonnik
▲