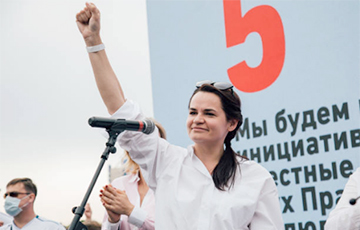 According to the headquarters, she has scored 70 to 90% of the vote in different regions.  63

Dzmitry Bandarenka: General Strike, Taking To Streets Every Day At 7 P.M. Should Start Since Tomorrow

August 10 Should Be Our Day!

Lukashenka Is Zero, And We Are 97% Natallia Radzina