The first night of the play Trash Cuisine staged by the Belarusian Free Theater in Amsterdam was a true success.

On 5 October, in the Amsterdam city theater Stadsschouwburg, the first night of the play Trash Cuisine by the Belarusian Free Theater gathered a full house.

A human and an animal, a human-animal, hunger, food, pain, death, cynicism and compassion, hope and irreversibility – these are the plot knots that the action of the play is centered around. The host of the scene - a moderator, conférencier, top-chef (Philippe Spall) - invites the viewers to a culinary journey all over the world. This is not a usual journey, but an extreme and merciless journey through the limbs of Hell; not transcendent and poetic, but an actual hell. The “dishes” of the play are cooked from real every-day stories and recent past of our planet, Radio Svaboda reports.

One of the theater’s directors Mikalai Khalezin said that the idea behind the play about the death penalty was born three years ago, but at that time the European partners of the theater were convinced that the problem was not acute. They said that the entire Europe had refused from the death penalty for a long time ago. However, after the process against Uladzislau Kavaliou and Dzmitry Kanavalau held in Minsk, and their execution Europe “suddenly” woke up, and the European cultural foundation has asked the Belarusian Free Theater to elaborate on this issue.

The menu of the theatrical dinner opens with the Belarusian history of 1942, the war, hunger and death. The death of a pig grown by a man for hard times, the death of his son who never got to taste the pork. The murder and the culinary here are standing together, but their link is more of a metaphor. For now.

After this story the viewers see a giant scene of a feast of two professionals, a Belarusian and an Asian, sharing success and failures in their jobs – executors. Drinking champaign and tasting delicacies, they discuss with delight the details of their profession. Eloquent pictures of the legal murder form the background of the feast.

Further, the documentary reality will again mix with brutal grotesque, and murders of people and the culinary art will get even closer until they collide in a horrible story from Ruanda from not long ago. A husband (khutu) who has got an order to “kill the cockroaches” murders his three children, dismembers their bodies according to the culinary laws, fries the meat in a frying pan and tries to make his wife who is still in bed after hard delivery (the youngest child was 2 months old) to eat the ready “dish”. The scene is solved with choreography, but the chef is frying real meat. Some viewers took it very hard…

Another real story used in the play is the fate of Liam Holden, an Irish republican from Belfast convicted to death penalty in 1973, but the sentence was later changed to life in prison. After 17 years in prison, Holden was released when it was proved that he had been tortured to admit the murder of a British soldier. In the next story, British lawyer Clive Stafford Smith, fighter for the abolition of the death penalty in the USA, tells every detail about the way of a convict to the electric chair. The lawyer is talking for every participants of the case. The humane authorities ask the convict what food he would like to be served before he dies, and he replies that it doesn’t matter, he’ll be fried himself so soon, and then he asks for a cigarette. But the administration of the prison refuses to give him a cigarette because smoking kills…

Another explosion of black humor was the demonstration of different types of the death penalty using the means of mimics, gestures and sounds (American actress Stephanie Pan): a gas chamber, decapitation, hanging, shooting by a firing squad, death injection, electric chair, all in a traditional comedian styling. Horribly funny… No, simply horrible.

From time to time the chef-narrator comments the play with Shakespeare’s monologues from Hamlet and Venetian Merchant, which emphasize the universal nature of the death penalty.

The culinary journey around the world finishes where it began – in Belarus. With Liubou Kavaliova’s monologue as a background, the case of the subway explosion is demonstrated. The scene is hard to retell, it should be seen. The mother’s last words are: “When Ulad was arrested, he told me: “Don’t worry, mom, everything will be fine and in 72 hours I’ll be free”. I still wait when these 72 hours will be over…”

Arkadzii Yushyn, Belarusian-American composer and guitarist, was playing life throughout the play. In the climax of Ulad’s story, Arkadzii was playing the Belarusian tune Kupalinka, a song about night, loss and tears.

When the audience exploded with applauds, and after the actors went out to the stage for the third time, producer of the play Natallia Kaliada invited three women to climb up to the stage and tell their stories. Valeryia Krasouskaia, Iryna Bagdanava and Liubou Kavaliova reminded the fates of their father (Anatol Krasouski), brother (Andrei Sannikov) and son (Uladzislau Kavaliou) and call upon everyone in the audience to remind their politicians what is happening today, in the 21st century, in Europe’s geographical center – in the modern Belarus.

The plays of the Belarusian Free Theater were shown under the patronage of the European Cultural Foundation headed by Dutch Princess Laurentien. The management of the Free Theater met with the Princess before the first right.

The first night in the Royal Theater wasn’t the only outcome of the one-month stay of the Free Theater in Amsterdam: the first political debates on Belarus were held on 3 October. The main topic in the debates was the trade turnover of Holland and other EU countries with Lukashenka’s regime.

Several viewers have shared their impressions after the play:

Robert Palmer, Director of Culture, Cultural and Natural Heritage of the Council of Europe:

“Every time the company demonstrates courage when they tell the stories based on real experience, and this is an incredibly strong possibility to realize the level of the hardships that Belarus is dealing. I believe that the world should learn about these stories more. The reaction of the audience here, in Amsterdam, was an important experience for me. We should press the Belarusian powers in every possible way to make them recognize that the demands of common people are valid. Of course, this play is only a little drop that has fallen on a stone. We need thousands of such events to make real changes happen.”

“For me, this is a very important event, when a Belarusian theater receives such attention in Europe, in Amsterdam. It is very important that people all over Europe find out that there is such a country, that there are talented actors who have much to tell the European audience. The topic of today’s play is complicated, but I am convinced that today with this play the actors of the Belarusian Free Theater have really reached to the people’s hearts.”

“On the one hand, I am impressed with the work of the Free Theater. They managed to elaborate their own specific esthetic language – I’ve seen five of their plays. In this play, there are several very strong moments, like for example the dialogue of the two “shooters” who share the secrets of murdering people, or the last scene about the execution of Kavaliou and Kanavalau. On the other hand, it is important that the focus in Holland is shifted to Belarus, the country where Lukashenka’s regime is running a successful petroleum business. I was also touched when Lera Krasouskaia, Iryna Bagdanava and Liubou Kavaliova went out to the stage. It was a risk for the authors of the play, because the viewers were leaving the theater under the most recent impression from what the women had said, which could replace the impressions from the play itself. I would like this play to be shown in Germany, to draw the attention to Belarus there, too.” 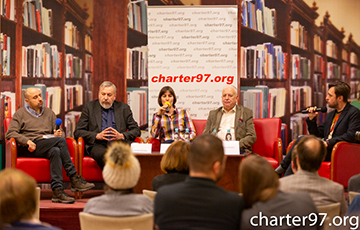